Throwing shade at arch-rival Khabib Nurmagomedov, Tony Ferguson has added a series of “29-One” t-shirts to his merchandise collection.

Nurmagomedov’s unblemished professional MMA record stands at 29-0. When Ferguson was at the peak of his career, he was considered the toughest challenge for ‘The Eagle’. However, the much-hyped fight never came to fruition.

In his latest dig at the former UFC lightweight champion, Ferguson has made it clear what he believes would have happened if he had the chance to share the octagon with Khabib Nurmagomedov.

Below is a screenshot of Ferguson’s “29-One” t-shirt:

Ferguson’s loss to Justin Gaethje at UFC 249 significantly affected the chances of his potential clash with Nurmagomedov. When ‘The Eagle’ retired from the sport after submitting Gaethje at UFC 254, he forever closed the door on the dream fight that fans waited years for.

With Nurmagomedov in retirement and Ferguson at the lowest point of his career, the two haven’t shied away from trading barbs. In a recent press conference held in Moscow, Russia, the undefeated Dagestani said that ‘El Cucuy’ should consider retiring.

“He is 38 years old. Tell me how he can make a comeback? He was dominated in his last three bouts. …Dariush, Oliveira, Gaethje, they all dominated him both standing up and on the ground. When you are 38, I believe, you have to pull the brakes and there have to be people around him to say: ‘Hey, you are aging, you have to stop’,” said Khabib Nurmagomedov (transcription courtesy: RT Sport MMA).

Watch Nurmagomedov commenting on Ferguson in the video below: 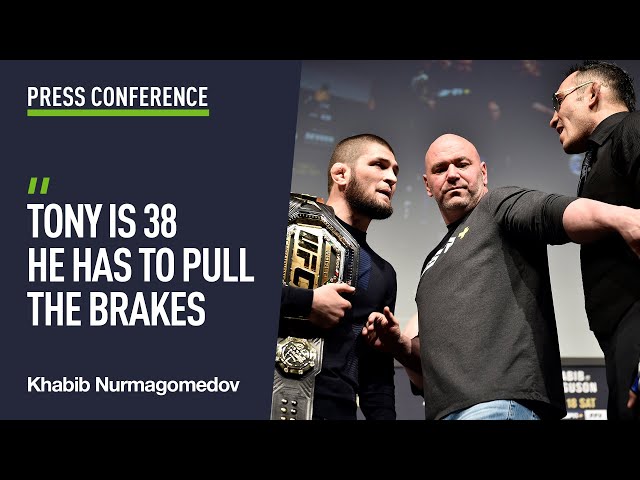 Every time the Tony Ferguson vs. Khabib Nurmagomedov fight was cancelled

Tony Ferguson and Khabib Nurmagomedov were first expected to fight each other in 2015. ‘The Eagle’ suffered a rib injury two months prior to the bout, forcing him to pull out of the fight.

The following year, the lightweight pair were scheduled to fight once again, but this time around, it was Ferguson who pulled out due to an injury.

When the fight was booked in 2017 for the third time, Nurmagomedov’s backbreaking weight cut regime had him hospitalized, which scrapped the fight once again.

When it looked like the two would finally collide inside the octagon in 2018, Ferguson had to undergo knee surgery, forcing the UFC to cancel the bout for the fourth time.

The UFC then booked the fight for UFC 249. However, Russia closed its borders due to the COVID-19 pandemic, which ultimately stopped Khabib Nurmagomedov from traveling to the U.S.

Time for 'Little Ozil' to save Mikel Arteta's chair